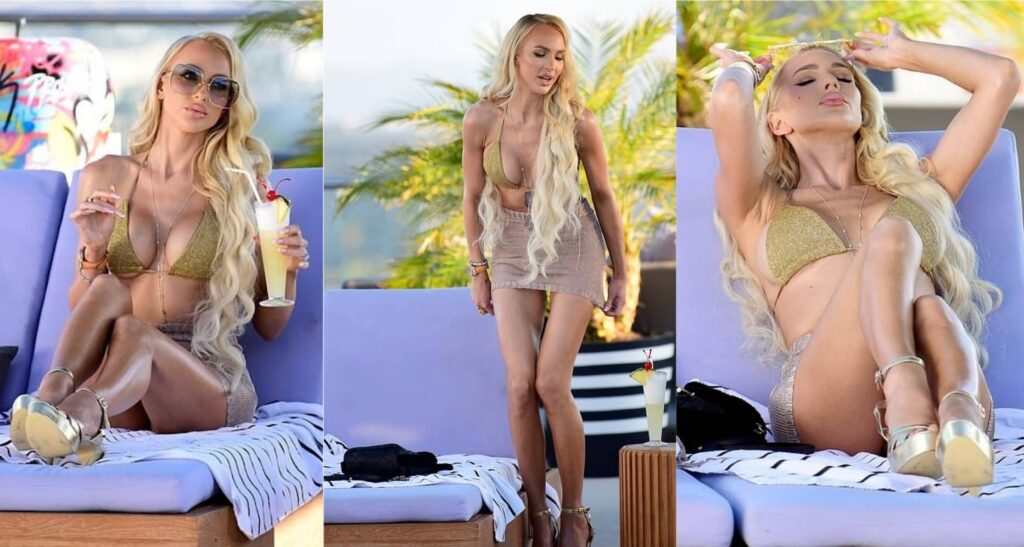 On Tuesday afternoon, ChristineQuinn put on a show while lounging poolside.

The 31-year-old Selling Sunset star was spotted filming her hit Netflix show at the Montrose Hotel in a gold bikini and a delicious cocktail in her hand.

On September 21, it was reported that the show’s production had been halted after a cast member tested positive for COVID-19, but it appeared that things had resumed after a 15-day hiatus.

READ ALSO: Rihanna is ‘planning to open physical stores’ for her Savage x Fenty lingerie line across the US in 2022

While filming scenes with Vanessa Villela, the blonde bombshell propped her incredible frame on a lounge chair on the hotel’s rooftop.

Christine was dressed to the nines in an eye-catching gold bikini top with a slinky mesh cover-up and a matching pair of stilettos.

Her platinum tresses were styled in mermaid waves, and she wore oversized sunglasses while sipping a cool drink.

The mother of one was seen reclining back before chatting with her latest season co-star at one point.

Though Villela, a former award-winning Mexican-American actress, was not photographed, Christine Quinn

recently gushed about her and the other ‘amazing’ new castmates on the hit Netflix show.

She told E! News, “We have a lot of new girls, more than you know.” ‘Three new members have been added. They try to bring in new people to shake things up.’

‘I mean, it’s hard because all these new girls are so great,’ she said when asked if the notoriously blunt breakout star would butt heads with any of them.

I’m not sure, but we all get along great.’

Emma Hernan is another new cast member who was first announced in the spring and will appear in seasons four and five.

‘The dynamic has changed because it’s not as small and tight-knit, and there are a lot of different characters,’ Quinn recently told DailyMail.com about the upcoming seasons.

READ ALSO: Maya Henry displays a scar on her breast while dressed in a plunging cut-out jumpsuit as she leaves Paris Fashion Week show

Although both seasons were in the midst of production, they were recently shut down after a cast member tested positive for COVID-19.

The entire cast and crew will be tested twice this week before production resumes,’ an insider told Us Weekly on September 21, adding that the show would be shut down for about two weeks.

Though it was never revealed which cast member had contracted the Coronavirus, it was revealed the same day that Heather Rae Young’s fiance Tarek El Moussa had tested positive.

All of her tests, however, ‘came back negative,’ according to the publication. Despite the hiccup, the cast appeared to be back in the swing of things on October 5.