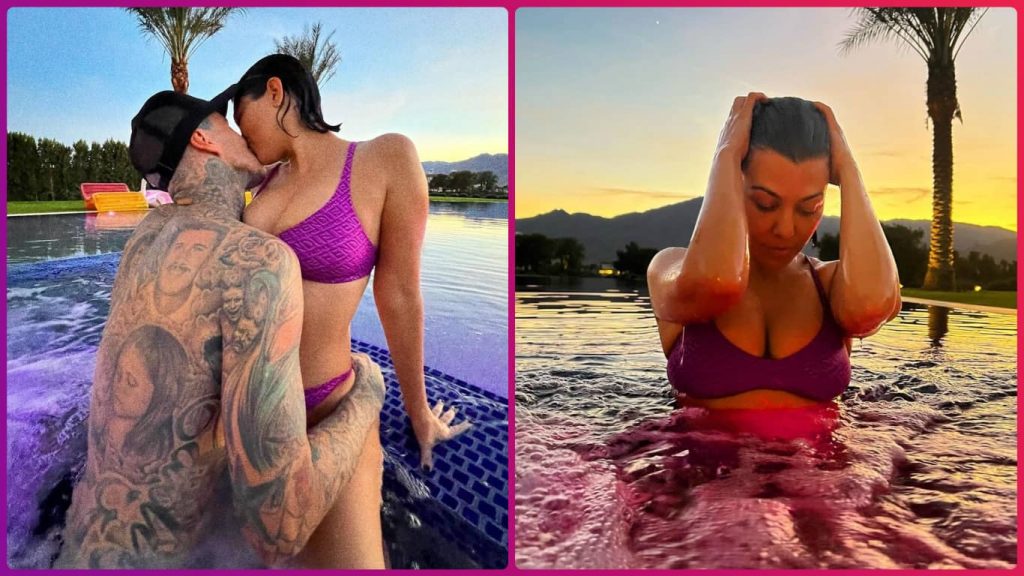 After posting a PDA-filled hot tub photo with fiancé Travis Barker, Kourtney Kardashian hit back at a fan who speculated that she might be pregnant.

“I’m not trying to be that girl, but does that look like a pregnant belly?” On a photo of the 42-year-old reality star standing in a jacuzzi with her stomach submerged, a fan commented.

“Are we going to do this every time I put up a picture?” Kourtney Kardashian retaliated.

The Poosh founder shared another steamy photo from her Palm Springs vacation with Barker, this time kissing her future husband on the edge of the pool while he held her waist.

“Life with you,” she captioned the photo, and the drummer for Blink-182 responded, “I couldn’t love you more 💜.”

The mother of three was also on vacation with at least one of her children, as evidenced by a photo she shared with her 9-year-old daughter, Penelope. With ex Scott Disick, she also has an 11-year-old son Mason and a 6-year-old son Reign.

It’s unclear if Barker’s two teenage children, who he shares with ex Shanna Moakler, were on the trip, but Landon, Barker’s 18-year-old son, commented on the PDA photo with a heart emoji.

The “Keeping Up With the Kardashians” star previously shut down a commenter who claimed she was pregnant at the time.

She clapped back, “I’m a woman with a BODY.”

After dating for about nine months, Kardashian and Barker, 46, got engaged in October. The rocker proposed on the beach in Montecito, California, with an elaborate flower display.

Now that Kourtney’s younger sister Kim Kardashian has been dating “SNL” star Pete Davidson, it appears the couple – whose every move has seemingly been documented since it was revealed they were dating – have some competition.

The two were first linked in October, and Page Six confirmed they were dating last month in an exclusive interview.

Davidson was recently seen out with a hickey on his neck, despite his “constant giggling” and desire to remain “low-key.”

Davidson, 28, went to a basketball game with his sister this week, while Kim reunited with ex Kanye West for the Louis Vuitton fashion show in Miami, which honored late designer Virgil Abloh.