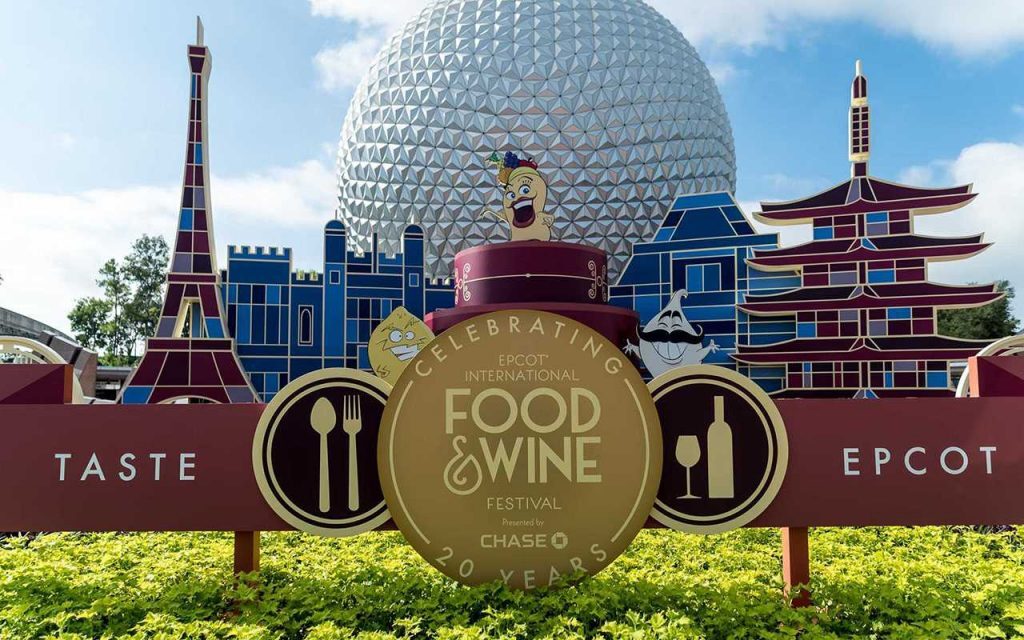 In recent years, Epcot at Walt Disney World has evolved into a festival park. Throughout the year, the theme park rotates its entertainment options. The Epcot International Food & Wine Festival, on the other hand, is the most well-known. Epcot is well-known for its food and beverage offerings. The World Showcase section of the park has become known for its cuisine and beverages as well as its sampling of other cultures. Drinking around the world is a rite of passage for many of Epcot’s older guests. This entails trying one alcoholic beverage from each of the countries represented in the showcase.

The Epcot International Culinary & Wine Festival offers a substantially wider range of food and beverage choices. Furthermore, in addition to the regular food stalls, there is added entertainment and other activities. The festival as a whole appears to be growing in popularity. The festival, which began as a 30-day event, has since evolved into a Summer and Autumn attraction at the park. From July through November of 2021, Epcot will be remodelled. So, what’s in store for this year’s lineup? So, let’s see what we’ve got. Prepare yourself.

What is the Epcot International Food & Wine Festival?

Now, before we get into the specifics of what the 2021 Epcot International Food & Wine Festival has to offer, let us explain what the festival is to newer readers and guests. An amusement park hosting a food and wine festival may sound unusual. In recent years, however, Epcot has evolved into a festival theme park. Throughout the year, there are events such as Flower & Garden, Festival of the Holidays, and Festival of the Arts. Epcot has always been a focal spot for celebrations at the resort. With so many countries to choose from, it’s only natural that World Showcase would become the place to try food and drinks from all around the world.

The food and wine festival is precisely what it says on the tin. Typically, the celebration featured many food booths serving traditional cuisine from various countries. The Eat to the Beat concert series would also be included in the festival. International artists would perform concerts at the American Gardens Theater regularly throughout the festival. Demonstrations of cooking and various types of lectures are also popular. Celebrity chefs were frequently invited to speak at these events. COVID-19, on the other hand, changed the landscape of themed entertainment, thus 2020 was a very different experience. The Eat to the Beat concert series had to be cancelled, resulting in a reduction in available entertainment. So, what does this mean for the event this year? Let’s have a look.

The Epcot International Food & Wine Festival, as its name suggests, is jam-packed with delicious food and drink. The event currently has 32 food booths providing food and beverages from six continents. If that wasn’t enough, 9 more booths are set to open on October 1st, just in time for Disney World’s 50th anniversary. This year, several old favourites have returned, including stalls serving food from Hawaii, Australia, and Germany. Brew-Wing (beers and wings), Lobster Landing, and Mac & Eats are among the fresh additions to this year’s lineup of speciality cuisines. In October, booths selling food from Brazil, Ireland, and India (to mention a few) will open. This year, there is something for everyone, regardless of taste.

Unfortunately, just because you have a park admission and reservation does not mean you get to eat whatever you want. The Food & Wine Festival is a terrific chance to try things you’ve never tried before, but it could put a dent in your wallet. Typical prices for food from the numerous kiosks range from $4 to $11. In the meantime, some alcoholic beverages are anticipated to cost between $5 and $10. If it’s any consolation, you can always buy a Food & Wine gift card, which will save you the trouble of having to dig through your wallet at each booth. With that stated, each Food & Wine Festival in Epcot creates a festive atmosphere. Even if you don’t plan on dining, it’s worth a visit because you can still enjoy the additional entertainment.

The Eat to the Beat Concert Series will not take place this year, as it did in 2020. The 2021 Epcot International Food & Wine Festival, on the other hand, will provide plenty of entertainment. At the America Gardens Theater, Voices of Liberty will perform songs from the Disney Songbook. Throughout the festival, Mariachi Cobre will perform traditional Mexican folk music on the same stage. Both acts normally switch on the stage every 30 minutes or so, so make sure to stick around and see both sets. The Jammin’ Chefs, who perform an eclectic percussion act using kitchenware, also return to the Canada Mill Stage. At the park, they can be found nearly every hour during the day. However, as usual, double-check the show schedule on the day of your visit.

On Fridays, Saturdays, and Sundays, select local bands provide additional nighttime concerts. Each band will have their residency dates and will perform two sets per night. According to reports, the lineup will include a mix of classic and new music to cater to the diverse crowd that Epcot attracts. The following are the dates for each band:

Of course, on October 1st, Epcot will welcome the all-new Harmonious nighttime spectacle. A fireworks show will be the perfect way to end your day at Food & Wine!

Is all of this a little too intellectual and adult for you or your group? Don’t worry, there are still a couple more Epcot International Food & Wine Festival activities available this year. Adults may choose to partake in a few alcoholic beverages, but this is a Disney park, after all. They still have to cater to the younger generation. The parade cavalcades are still going on while the paths of the World Showcase are crowded with numerous food stalls. The Princess Promenade is currently located in Epcot. A horse-drawn carriage may frequently find its way out onto the World Showcase streets. On board, you’ll see some of your favourite Disney princesses, who will be sure to wave and grin at the youngest passengers.

With the release of Remy’s Ratatouille Adventure this fall, it only makes sense that the festival include some Remy-themed activities. This year, Remy’s Ratatouille Hide ‘n’ Squeak Scavenger Hunt will return to Epcot. Guests can buy a map and stickers and try to find all of the hidden Remys strewn about the place to win a prize. Emile’s Fromage Montage will also be back in 2021. Guests can buy and taste five different cheese-based dishes, then get their festival passport stamped and win a reward!